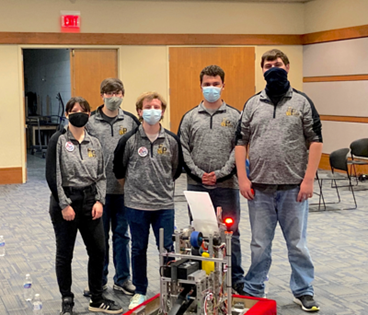 For Inspiration and Recognition of Science and Technology or FIRST, the Chairman's Award is the most prestigious award at FIRST, honoring the team that best represents a model for other teams to emulate.

The award was created to keep the central focus of FIRST Robotics Competition on the ultimate goal of transforming the culture in ways that will inspire greater levels of respect and honor for science and technology, as well as encouraging more of today’s youth to become science and technology leaders.

“The Gigawatts are only the third Alabama team to ever win the Chairman’s Award and the first since 2008,” he said.

The FIRST Robotics Competition is geared towards ages 14 to 18 and ninth through twelfth grade. Teams design, program and build a robot starting with a standard kit of parts and a common set of rules to play in a themed head-to-head challenge.

Due to the COVID-19 pandemic, this year's competition was held virtually and the Gigawatts competed in six different categories of events including, Robot Game, Engineering Design, Game Design, Innovation Challenge, Dean's List and the Chairman's Award.

“We are fortunate to win the Chairman’s Award which is FIRST’s most prestigious award,” said McClung. “It is a huge accomplishment for our young team to win this award after only three years competing.”

The robotics program set roots at Fort Payne Middle School seven years ago. Since then, McClung said the students of Gigawatts have expanded the program to now have 30 members in the middle school and 27 at the high school.

“This award is more amazing when you consider the location and resources the Gigawatts have,” he said. “While many teams have college engineering departments as coaches and mentors, the Gigawatts have established a group of mentors that exceed expectations.”

“This will be our third year as a FIRST Robotics team at the high school level,” said McClung. “Most of our team consists of sophomores and freshmen. Many of the students started as fifth graders and have moved up to being on the high school team.”

Following their win, the team is set to compete in the upcoming FIRST World Festival, originally held in Houston, Texas. However, due to COVID-19, it will also be held virtually this year.

He said as the first team from Alabama to achieve the Chairman’s Award, it brings him pride seeing his students working late at night, on weekends, at events around the state while putting in over 2,500 volunteer hours and learning new skills.

“To say I am proud of them seems like an understatement,” said McClung. “I am honored to be able to share in this journey with them and excited to see what more they will accomplish.”

In comparison to adversary teams, the Fort Payne community is small. However, the Gigawatts team sends their thoughts of thanks to the community for their continued support and encouragement.

“We have something special in this team, but I think that is true of Fort Payne as well,” said McClung.